A nature artist, one of our featured artists in residence and a part-time Nature Officer for the Cairngorms, Justin Prigmore has immersed himself in the great outdoors and the creatures that live there.

When I spoke to him, Justin Prigmore had just returned from a delivery. He likes to personally deliver pieces of his work to his customers as it allows him to build a rapport with them that he could not otherwise achieve. With his work featured in The House of Bruar Art Gallery, Justin enjoys coming into the store to speak with his audience. His commitment to his clients is reflective of his dedication to the subjects he paints and an insight into his connection with the world. 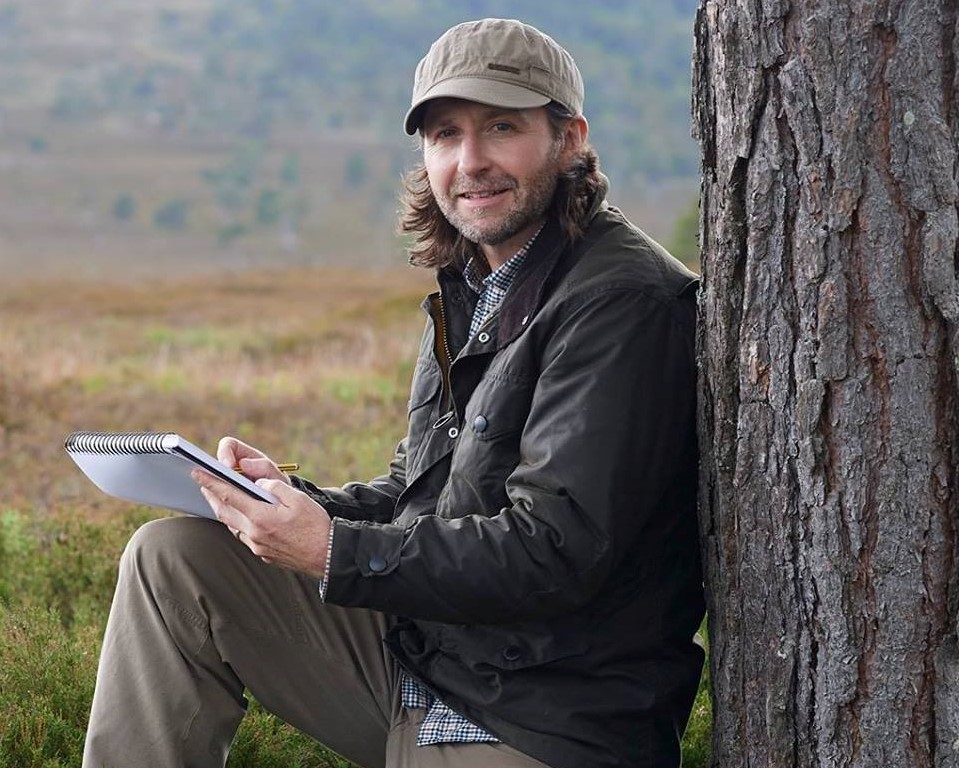 Born in 1974, Prigmore has cultivated an unrivalled interest in the world’s wildlife. After obtaining his Master's Degree in Ecology, Prigmore worked on conservation projects in some of the world's most attractive wild places. He is currently working part-time as a Nature Officer in Scotland’s Cairngorms National Park, where he is able to spend a vast amount of time surrounded by the wildlife that inspires his work. His life choices and the paths he has taken each provide a deeper example of his compassion and commitment to the natural environment in places all over the world.

Prigmore feels his move to Scotland has been very beneficial for his art and, having visited a lot as a child, knew how captivating the scenery could be. “There’s no place in the UK like Scotland,” he states, “especially if you’re a nature artist. With so many places and animals, Scotland is an endless source of inspiration.” His most recent work is reflective of his move to the Highlands. The focus has shifted onto the country's native animals, principally on Red Deer, Grouse, and Capercaillie which are prominent where he resides. Committed to his work and the subjects he paints, Prigmore has taken up stalking deer as a way of getting closer to them and learning more about the species within their natural habitat. This behaviour is not unheard of as he has also recently monitored Capercaillie by sleeping in a hide in the woods so as not to miss any of the action. He recalls this project which required him to stay overnight in a canvas hide to ensure he remained out of sight. During his stay, his hide came under attack from a dominant male whose natural instinct told him something was wrong. This experience gave Prigmore an insight into the unseen elements of a wild animal’s personality, and let him see first-hand that it is possible to be intimidated by a bird. 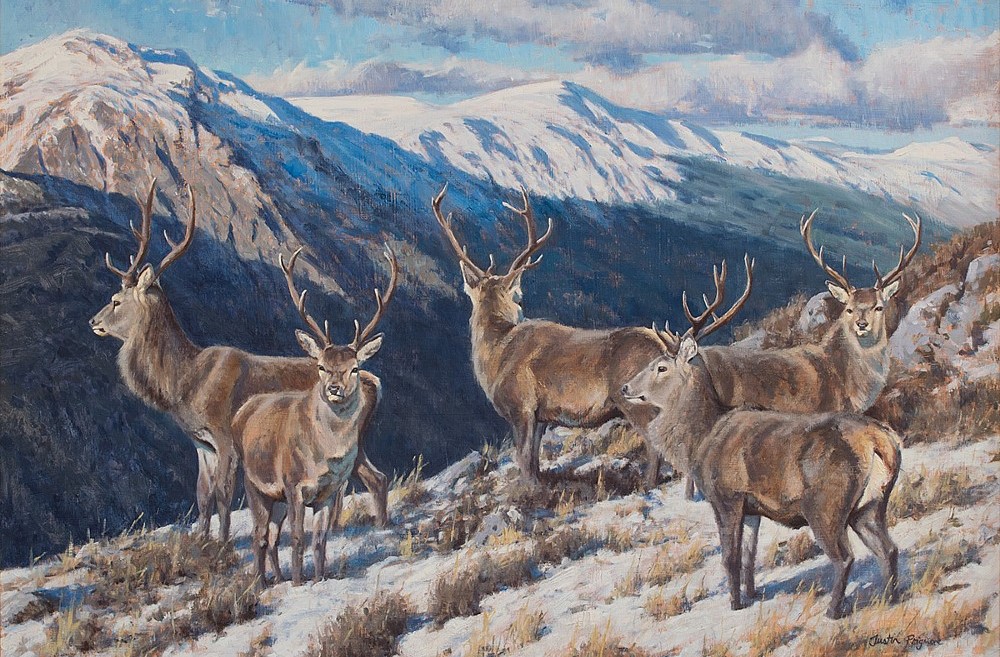 When asked about his work-life balance, Prigmore discusses the opportunity and the flexibility when it comes to working on his art and spending time with family. “It’s a privilege that when the kids go off to bed I can go to the studio and paint into the early hours of the morning. Even having the flexibility to work at any time,” he confers. “It’s so important to get out to places and see different things, which being able to do at the drop of a hat is fantastic.” Prigmore feels his children have inherited their parent's love for art and are budding artists themselves, producing elaborate doodles that he feels come from watching their parents paint throughout their whole lives. He feels lucky not to have lost his interest in art like many do as they get older.

One of Prigmore’s early influences was Robert Bateman, author and wildlife artist. Calling Bateman a master in the field, Prigmore states he felt inspired by him to travel and see all the magnificent places and the wildlife that have made those places their home. Bateman made Prigmore fall in love with the idea of being an artist, and wish to paint all the areas he wanted to visit.

It’s a privilege that when the kids go off to bed I can go to the studio and paint into the early hours of the morning. Even having the flexibility to work at any time


Also well travelled, Prigmore has worked in many different places, immersing himself in nature and the wildlife that resides there. It is through his travels that he discovered his interest in painting wildlife. Of all the places he has visited, Prigmore lived in Sweden the longest, it is also the country his wife is from. He found the country to be a fantastic location for his art. “We worked in the North of Sweden and up there the wilderness is at your back door, it inspired many paintings”

Prigmore reminisces about his time in Colorado on a gap year from university, where he was exposed to the world of wildlife paintings and their popularity in American culture.  This was something he hadn’t experienced before anywhere else and presented him with fresh opportunities for his work, inspiring him to venture into this world. He now gains special recognition in the United States, especially within the Bennington Centre for the Arts in Vermont, and the Wildlife Experience Museum in Denver, where pieces of his permanent collection have been purchased for display. He has also been recognised by the Society of Animal Artists, who appointed him a signature member. 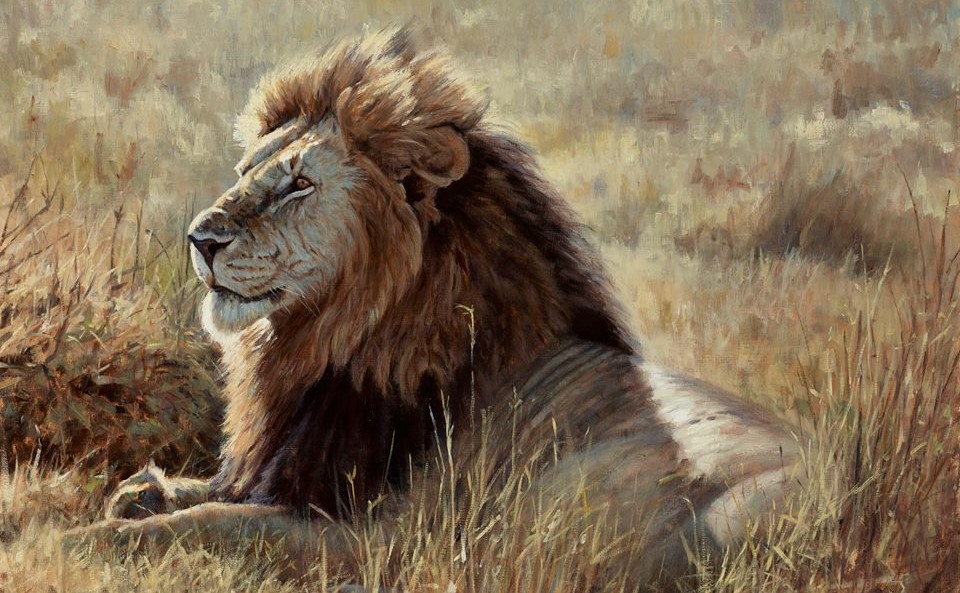 When describing his wanderlust, Prigmore says he is keen to get back to East Africa where he enjoys painting the wild animals native to the land. He describes Africa as a fantastic place and wishes to return soon. Prigmore discusses how travelling has become part of him and his art. Every place he visits provides him with inspiration that he is able to take home with him and incorporate into the piece he is working on. Prigmore has a strong integrity in his work that he feels all artists have to an extent. “You can’t be an artist if you’re not a perfectionist,” Prigmore states. “You have to be prepared to throw away a weeks’ worth of work if it’s not capturing what you want. If you’re set on telling a story it has to be right and I think most artists have that mentality.”

Prigmore’s plans for the future involve more travel; India in particular. “I would love to go to India, I want to see a tiger in the wild or even go to the mountains and see snow leopards,” he says. He goes on to discuss that all plans for the future still involve his usual process of researching his subject. Prigmore takes the research for his work very seriously. He ensures he gets to know his subjects intimately and finds that portraying this closeness makes his work appear more natural. For the immediate future, he is looking into getting a larger studio space for his work. With this, it is his goal that customers can come and visit the space to see the pieces in person. Whilst he is not entirely sure where this new space will be, he has stated that he intends to stay in Scotland.

You can’t be an artist if you’re not a perfectionist, you have to be prepared to throw away a weeks’ worth of work if it’s not capturing what you want. If you’re set on telling a story it has to be right and I think most artists have that mentality.


His relationship with The House of Bruar began after being approached at the Scone Game Fair by the Gallery Manager at the time. He feels that working with The House of Bruar has given him a stamp of approval for his work.  “The House of Bruar epitomises quality, everything in the store is good quality and it’s a fantastic association to have with my art,” Prigmore states. He enjoys coming into the store and meeting everyone, he feels this gives him a sense of how his customers tick.

You can view our online collection of Prigmore's work here, and our full collection is available in The House of Bruar Art Gallery in-store. 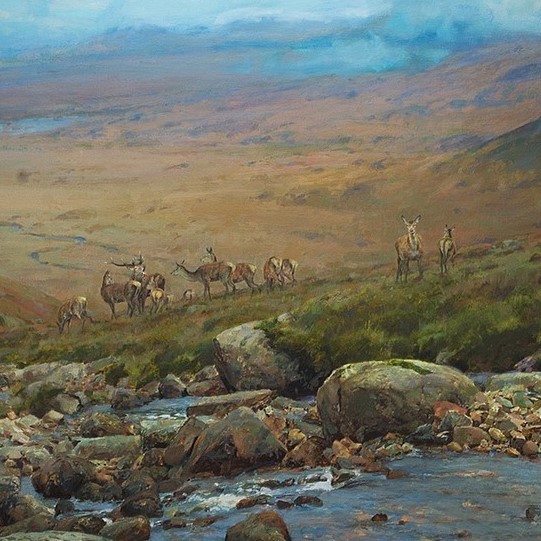 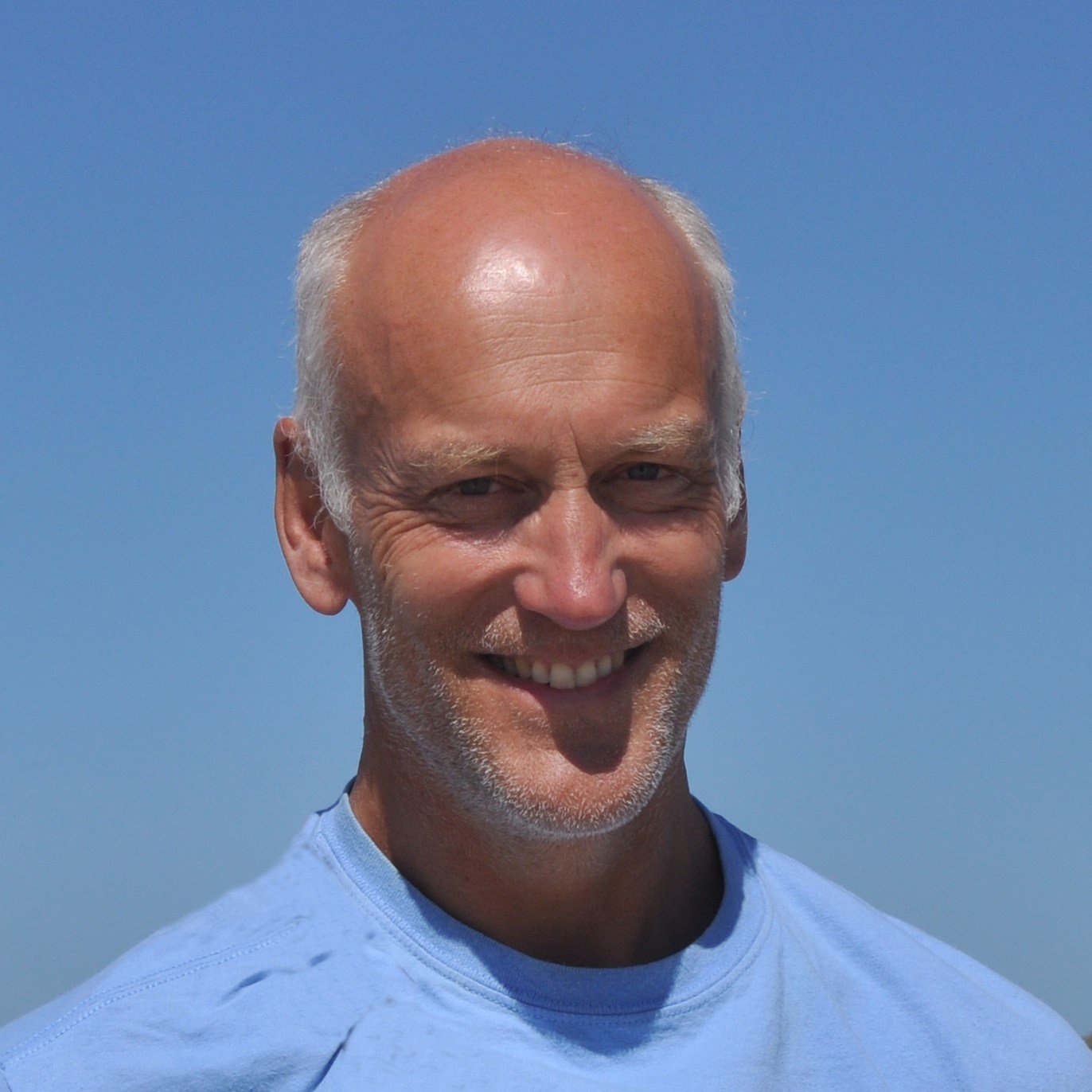 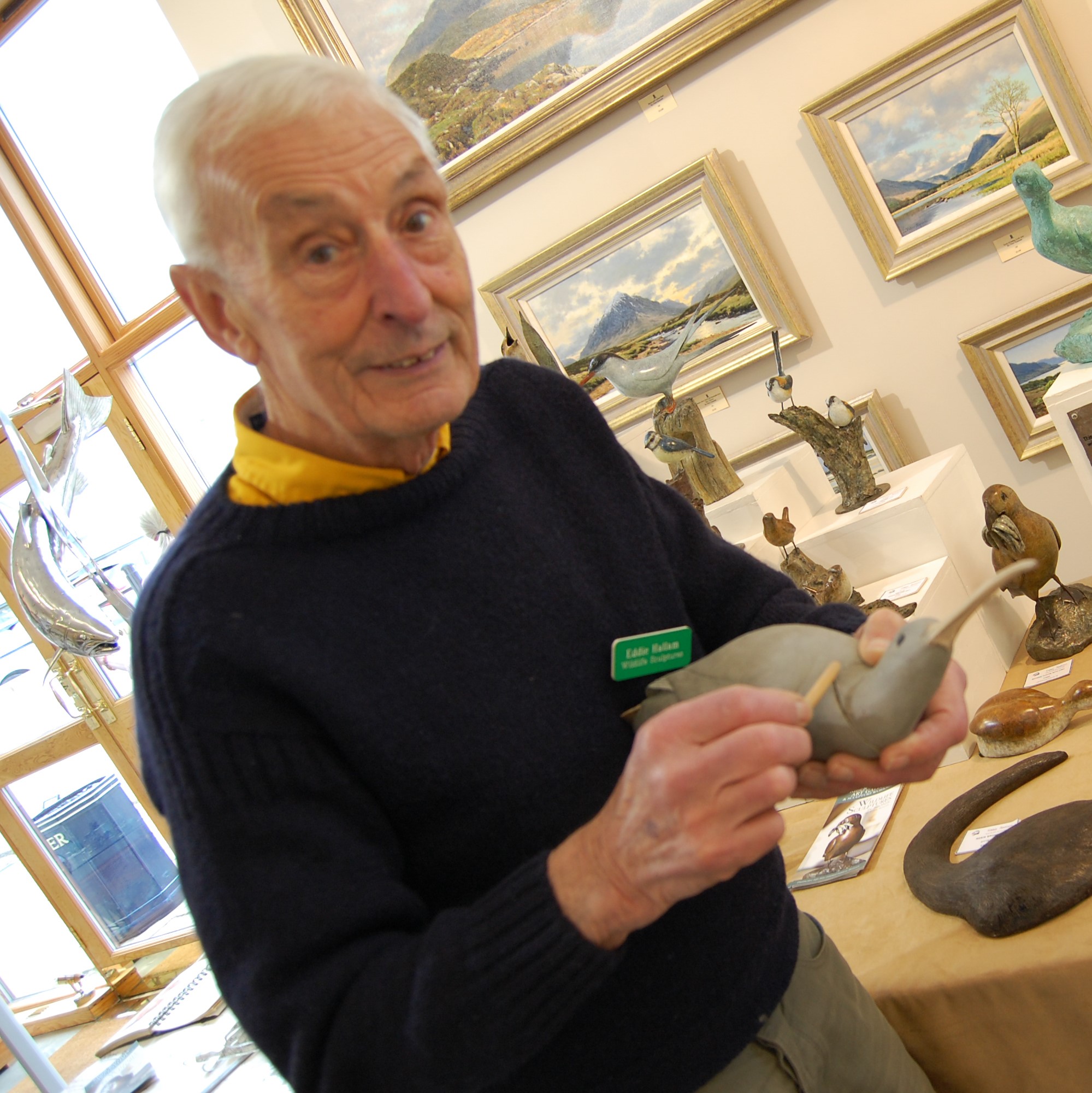 Monday, 5th June 2017
A lover of everything wildlife related, Eddie Hallam is an an artist who genuinely cares about all aspects of his work.
Read the full story
1